A Caribbean Self Taught Digital Artist who enjoys draftsmanship, literature, films and music in general.

Arcane: An Animation That Dares to Break the Molds

Netflix's highly-rated animated series, Arcane, is a drama show based in the League of Legends universe with fantasy and steampunk settings. It was produced by Fortiche Productions and Riot Games, the first of its kind for both companies. It was a joint venture with the quality of a big-budget animated feature film (think Spider-Man: Into the Spider-Verse) in an episodic format.

Being one of those few western animated shows in modern times that aren’t aimed at kids, Arcane’s mainstream success pushes the format in new directions. It brings new forms of storytelling that cannot be done in live action.

Frequently lost in modern media, subtlety is a key element for a show like Arcane to remain entertaining and enjoyable. Because of this, the show can tackle themes without feeling patronizing toward its audience. Themes like drug addiction, sex, violence, poverty, child exploitation or mental illness are not celebrated or fetishized, and the visuals remind us of that. Mature audiences will appreciate that heavy themes in this series are handled in a thoughtful and responsible manner. Overexposure and fan service aren’t present, and the narrative follows gracefully one of the most important maxims of literature and cinema: “show don’t tell”. There is a lot of foreshadowing, and if you pay attention, you will pick hints through the story and feel rewarded.

In Arcane, we experience a story that begins to unfold with violence, and we see its effects across the series through the lenses and actions of the main characters: sisters Vi and Jinx. The sisters are trapped in a power struggle between two cities and their factions. On one side, we have the advanced, cosmopolitan and opulent city of Pitlover with wide streets, big buildings and workshops covered with gold ornaments; in a style that is a mix of Art Déco and Neo Gothic architecture. The city of Pitlover is ruled by a council and controlled by law enforcers. In that city, academics and scholars thrive but so does corruption. The cities are separated by a big canal and connected by drawbridges, and on the other side, we have the city of Zaun. Zaun is a labyrinthine “undercity” that is polluted and filled with shady characters, markets and food stalls. There the streets and buildings feel cluttered; its inhabitants have a sense of brotherhood and are ruled by thugs and crime lords valuing strength and pride above all else. One of the main conflicts of Arcane is that the balance of power between both cities is about to change with the invention of a new technology (Hextech), with that tragedy sets in motion. The series makes us question human ingenuity and ambition for the betterment of the world, a message that It’s not anti-science per se, but it reminds us that morality and science don’t always go hand in hand and can often collide.

Arcane characters are complex and well-written. We get to see their motivations and struggles and even relate to them. Their development through the series is outstanding and well-paced. More often than not, I felt myself siding with characters through the series that in the first arc, I wouldn’t sympathize with at all. Trauma is one of the main drives that push characters forward, though typically not in the direction they want. There aren't easy solutions for the conflicts in the world that Riot Games and studio Fortiche Production crafted.

Characters' facial expressions are one of the strongest features of the show. The animators at Fortiche Production did a great job conveying emotions, gestures and mannerisms. The movements are also amazingly crafted and are a joy to watch, especially the parkour. Combat scenes are wonderfully animated too. They are dynamic and accompanied by great music. We can sense the weight of the punches, as well as the pain and the struggle in fights.

Thanks to the amazing art style, animation and voice acting, Arcane characters can convey real emotions (we can even notice micro expressions). In the world of animation, this can be hard to pull off. Often times as art styles turn more realistic, we approach the “uncanny valley”; because of that, audiences often feel that something is off with the character's facial expression or movement. On the other hand, if the style is too cartoonish, it can be difficult to feel empathy and tell a story with profound or complex emotions. In the case of Arcane, they found the perfect balance; a blend of cartoon and realism.

The pace of the narrative can feel fast for some, but the dialogue, music and motion always feel cohesive throughout the series; the cuts and transitions are also great. The composition of the scenes is really well crafted. Every scene feels beautiful. You can pause the show and appreciate the beauty of the gorgeous landscapes and scenery that feel like an oil painting; the colors are vibrant and saturated when they need to be, and the art style is beautiful. They have achieved the style by mixing 2d and 3d animations techniques. 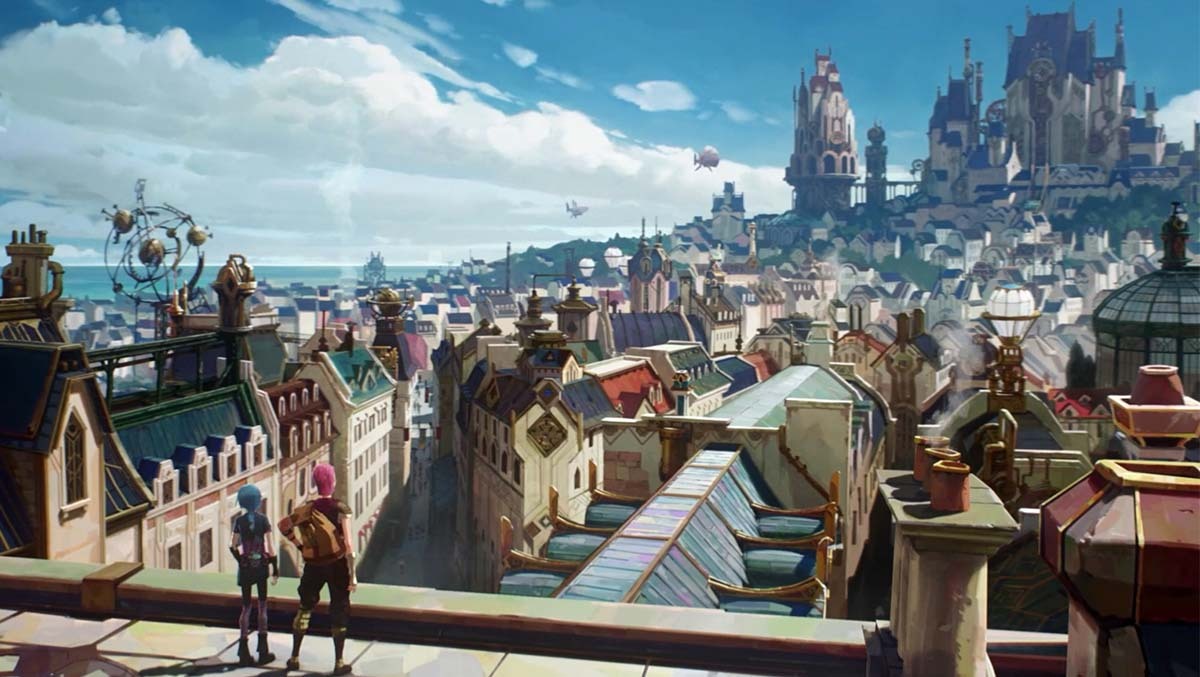 (Jinx/powder and Vi on Piltover rooftops)

Arcane is a really special show, more often than not, we are being told by artists how to feel about their creations on the basis that those works represent something about the world; instead of the merit in how they represent those ideas. It's common practice to build a hype machine on social media before release, and in most cases, shows fall short, and we get a cookie-cutter version of representation. So it's a surprise that a show that comes from a video-game company that has made the news for its frat-like work environment, managed, with the joint efforts of Fortiche Production, to tell such a good story that depicts powerful, respected and fleshed-out characters in a way that make audiences feel empowered.